I’ve been continuing to work in Layar, completing the Harris Museum Industrial Revolutionaries, and working with Martin Reiser, Ximena Alarcon and Kasia Molga on the Riverains project, which overlaid video responses to the history of Shoreditch and London to sites along Old Street and Shoreditch High Street. The experience of developing these projects, working with Google Maps and Street View reinforced an idea I wrote about in Site-Specific Stories, the idea of an immersive, site-specific cyberspace, which is woven into the physicality of the spaces we inhabit, partly enabled by mobile and locative connectivity. It has led me to think about the construction of spaces, whether virtual, fictional or real, and the aesthetics, narratives, rules and systems which underpin them. 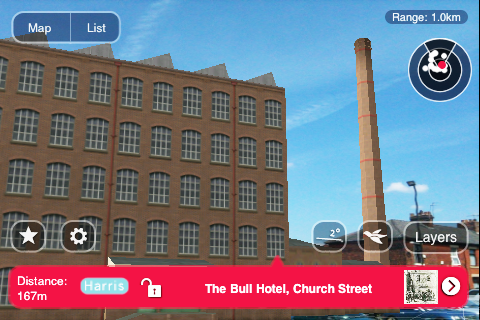 Robert Klanten and Lukas Feireiss’ Beyond Architecture: Imaginative Buildings and Fictional Cities looks at how artists have responded to cities, creating images, installations and environments which reconfigure and rethink cites, from Slinkachu’s tiny vignettes installed in city streets to Mike Kelley’s sculptures of Superman’s home city of Kandor on the planet Krypton. The pieces in the book range from dystopian dioramas to electronic pastoral landscapes and impossible buildings, and reflect our imaginative responses to space. Virtual worlds, comics, pop songs, film and TV also reflect these responses, casting the city as an active character in their stories. The video below is a mashup by UkuleleElvis of Jamie Hernandez’ poster produced for  Bob Dylan’s Theme Time Radio Hour. It uses Ellen Barkin’s spoken intros to depict the lives and struggles of characters living in ‘the big city’;

The internet also uses metaphors which link us to the built world – site, home, geocities, under construction etc. as well as nature metaphors (stream, cloud etc.) which Sue Thomas is exploring in The Wild Surmise. In 1997, I created a net-art project called ‘Home’, as part of a residency. I was interested in the metaphor of home in relation to the internet, and the amateur-created personal web pages that allowed us to peer into the lives of the people who made them. Using an early and simple cgi homepage maker script, I built an imaginary new housing estate, where users could ‘visit’ the homes of people who already lived there, and build their own virtual home.

About a year ago, I read a story about Argleton. Argleton is a place that doesn’t exist, but which appears on Google Maps, near the village of Aughton in the North West of England, about 15 miles from my Mum and Dad’s.  It’s apparently a mistake on the map, perhaps a misspelling of Aughton, or a deliberate red herring, added to catch out unwary map copyists. Either way, it exists, as a place you can search for, plot directions to and visit. The appearance of Argleton, and the responses to it including a spoof village site (now defunct) and psychogeographical explorations reminded me of two online writing/art projects which had influenced me.

Nina Pope and Karen Guthrie’s ‘An Artist’s Impression’ (1999-2000) combines a MUSH, an online text based environment with the building of a scale model of the island the artists created in a gallery space. From an initial plan which mixed up descriptions of places from the artists’ own backgrounds and memories, the island increasingly became a space modified, tweaked and developed by its inhabitants, the users of the MUSH who took up residence there. In writing about the piece, Guthrie returns often to the sense of reality and physicality inhabiting the online space, the sense of a real world shared in real time.

In particular, we would cite a conversation in a Pet Shop built on Island, between the owner and a visitor: The shop's code was comparatively advanced, with various quirky objects for sale, but rather than chatting about these virtual pets, the visitor looked upwards and began a conversation about the non-existent, uncoded ceiling repair he felt the shop needed. Without pausing, the shopkeeper responded with an explanation, and the DIY repartee that followed would not have been out of place in B & Q on a Sunday morning. This may seem a banal and trivial incident, but it's typical of the consensual imaginative space constantly recreated and sustained by MUSH players.

from An Artist's Impression – Essay 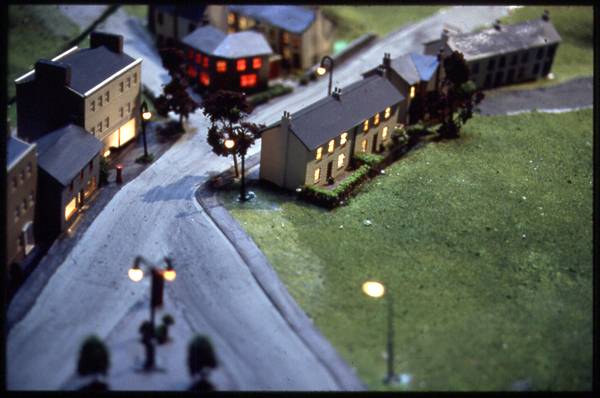 Tim Wright’s In Search of Oldton creates a lost village built from the memories of places and people lost and half forgotten. Through the course of the project, and through the project blog, readers were invited to submit stories, images,video and sound to create a collaborative Oldton.

Towns, cities and villages are collaborative projects, and these two projects use the idea of the urban space to create complex narratives of both shared and personal memories and associations. In the case of Oldton, the place can never exist physically, as it is a mish-mash of memories, shared through the common reference points of roundabouts, corner shops, parks and houses, where An Artist’s Impression, in the creation of its ‘real-world’ counterpart focuses on ‘the impossibility of mirroring an online space’.

Using Layar, and in particular the possibility to view 3D models in Layar, I feel it would be interesting to revisit ‘Home’. I would like to build a collaborative model of Argleton, which would be placed in the physical location marked out by Google. This augmented version of Argleton will be a place you can visit, walking around the buildings as you view them, interacting with them, and leaving messages for the inhabitants. A while ago I sent a call out on Twitter, asking people to contribute their ideas for buildings they would like to see in a fictional city, either an invented building, or a favourite one, the shop you’d like to open, or the house you’d like to live in. I plan to model the buildings and place them in Argleton. I’d like to extend the invite out here too. If you would like to suggest a building for Argleton, please contribute on the Transliteracy Notes Ning! Each building will have the option for ‘actions’ to be applied to it, so if you like you could add a story of the building and its inhabitants, links to images, audio and video. I plan to document the models and the augmented reality view elsewhere, but the only real way to experience Argleton will be to visit and to walk around the tiny settlement, a virtual space pinned to real space.

3 thoughts on “Under Construction”