The presentation below was given on Wednesday April 23, 2008 at the IOCT.

| View | Upload your own

Some photos:
From Sue Thomas 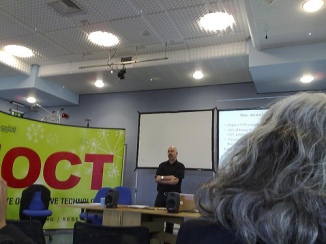 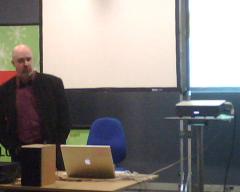 And, because I can, 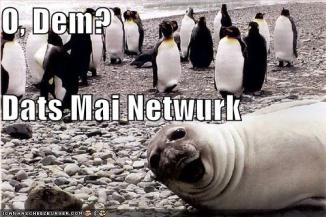 see more crazy cat pics
Given that there is a whole wiki devoted to the communal construction of lolspeak there's a transliteracy connection to the photo. Honest.

On April 23rd we held an IOCT research seminar in which the findings for the "A Million Penguins" research project were presented. Jess has blogged about it and the PDF of the report is now up on the IOCT research project site http://www.ioct.dmu.ac.uk/projects/millionpenguinsanalysis.html
The crux of the presentation was an analysis of "A Million Penguins" as a carnival in the Bakhtinian sense. Rather than thinking about the site as a "failed" novel, I think it makes far more sense to look at how the various users (and those who set it up) tried, not always successfully, to transliterate notions of authoring, wiki behaviour, editing and publishing within the setting. In this respect, the wiki novel is more like something out of the folk tradition. Instead of stories shifting and changing as they are transmitted over generations, in "A Million Penguins," plots, motifs and characters shift and change over hours as you track them through the edit history of the wiki.
As Simon Perril noted in a question, the texts and performances in a carnival are often quite conservative and formulaic and this reliance on formula allied to attempts at transliteracy probably help explain the types of text we see there.
For a fuller explanation, please check out the report or leave a comment. We also intend to publish papers that go into detail about some of the subjects arising from the project and will point them out on this blog as they happen so watch this space.

One day the citizens of South Park wake up and find the internet is gone. When Randy hears there may still be some internet out in California, he packs up his family and heads west. Hilarious!
[South Park 1206] (thanks to Keredy Stott)
x-posted at my website

I've written about slowness here before and so has Bruce so it was nice to see a post yesterday from Nancy White offering up the idea of slow community I was enthused by this and wrote a longish comment which, perhaps because for ironic reasons, kept failing to arrive. And so this morning, in desperation, I am posting the comment here in the hope that eventually it will find its way to Nancy's own blog. The problems may themselves be due to slowness (my current reliance on dialup) which makes them quite poignant! Here it is: