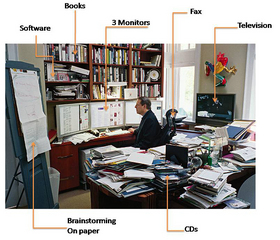 Via Ubernoggin comes this interesting annotated photo of Al Gore's desk. The author grounds the discussion in Bolter's concept of the Hypermediated work environment.

In hypermediated environments (such as MSNBC's split screen with scrolling stock ticker, headlines, weather updates, and talking head all on one screen) the medium itself is an integral part of understand[sic] the information being presented. For example, the same headlines from the MSNBC screen, when printed in a newspaper, don’t function the same way as they would as headlines on an RSS feed. The method in which the information is delivered changes the way we understand it. This is critical to understand as we choose the methods in which we consume and deliver information.

This is, of course, crucial to our understanding of transliteracy. Bolter approaches the phenomenon from the perspective of medium; transliteracy also considers the modalities involved. I suggest that Gore takes advantages of the different modalities – whether associated with a specific medium or across multiple media – to manage the "information glut". For example, possibly the modality of movement (as in the scrolling ticker) enables him to treat certain kinds of information as recurrent. I also strongly suspect that the seemingly chaotic state of his desk actually breaks down into piles of books used for specific purposes.
From simply inspecting the photo, it is hard to say a lot but I suspect that (assuming the photo isn't staged) what we have here is an example of a transliterate working space. Calling it hypermediated might be to imply that the digital technology defines this working space. I suspect that what defines it is the interplay of literacies and that the digital media are just a part of that.

END_OF_DOCUMENT_TOKEN_TO_BE_REPLACED

Everyone had the opportunity to discuss the qualities of transliteracy during the small group session and some groups enjoyed added high-tech accoutrements like coloured felt-tips and flip charts.

END_OF_DOCUMENT_TOKEN_TO_BE_REPLACED

Jess Laccetti "Aladdin began by noting that different systems call for different forms of perception and that important to him is a kind of overall "wholeness" to experience."
Roland Harwood "Effective communication and building trust gets a lot more difficult when technology is involved as you don't have the usual body language and eye contact that we often take for granted in face to face interaction. Blogs, social networks or online environments like Second Life, all have their own cultures and etiquette, which are often not obvious to the uninitiated."
Ruth Page "In the Q/A session that followed lunch some of the questions were: How/why does the tran in transliteracy help us going from between, across to beyond? Can it help us to think about what is further ahead (for example how might 2-D immersion say on the web, 2nd life etc become multidimensional and more embodied?)"
Will Pearson "There is a need to better understand how media works with one another, not just side by side."
Jerry Fishenden "The scale of change coming in the digital era will make that industrial revolution transformation look trivial in comparison. We are about to transcend literacy."

Via Christy Dena's excellent blog I came across an entry about a new and rather interesting looking Transmedia graduate course at the University of Florida. It has me wondering about the relationship between transmedia storytelling and transliteracy.
I first came across the term transmedia in an article about Matrix Reloaded before it came out and before anyone discovered just how awful it was going to be.1 What was interesting was the way that the computer game, website and Animatrix collection told the story of what happened between the first and second movies, spreading the narrative across different media. Since then, many have done the same. At the end of season 2, the new Battlestar Galactica TV show produced a series of webisodes detailing life under occupation and Heroes has spun off several websites and fake blogs. Lost did something similar during the first season. Even the BBC got into the act with Dr. Who, setting up fake websites that had nominally been created by some of the characters or institutions. (The secure login is badwolf, in case you're interested.)
Unlike The Matrix, none of these seem to progress the story; they fill in some background, play games and create puzzles but you can watch the show without them. None of them require you to interact with several media in order to follow the narrative.
In an email, Chris Joseph writes "I think that transmedia has a very interesting relationship to transliteracy, due to the two quite different ways it is used (and that Christy has suggested here). The first – the same media repurposed across different media. The second – a narrative 'world' explored and expanded across different media. The second is a lot more interesting from a production (and reading) perspective, I think. Curiously the 'trans-' in transmedia in the first is across, while the second is across AND beyond." I think this hits the nail on the head and I agree that the second is far more interesting and obviously speaks to transliteracy. A born transmedia narrative (if any commenters would like to link some, that would be great) would require transliterate authoring and "reading" if it is to be compelling. It also indicates, I think, that transliteracy always goes "beyond" once you use it across media because you are creating an emergent literacy through the literacy interactions. It seems to me that the "beyond" is the skill of being able to work across and, through so doing, create or "read" novel forms of storytelling.

END_OF_DOCUMENT_TOKEN_TO_BE_REPLACED

Various PDFs of the speakers' notes or additional material are listed below.

The list is only in PDF due to the usual issues of email address harvesters.

Here's a pdf of my Welcome and Introduction. This document covers the opening of the Colloquium and includes a discussion of a proposed set of five qualities of Transliteracy. Later in the day there was much discussion about the idea of qualities and the idea might not survive in its current form, but hopefully it will be a springboard for further discussion.
Download file

While everyone has an hour to work in their groups, refining the definition and characteristics of transliteracy, I'll add a bit about our summing up session. After lunch everyone had a chance to share ideas and ask questions to the panel about presentations or about the idea of transliteracy in general.

END_OF_DOCUMENT_TOKEN_TO_BE_REPLACED

"For me, the most important moment came reading a Sherlock Holmes story when I suddenly realised I'd been following the tale for several minutes having completely forgotten about the Iliad itself. This, of course, is essential: how many of us could get anything out of a book if we were constantly saying, in a small voice, "Hey, look at me – I'm reading this thing"?"
Andrew Marr is a British journalist well-known for his measured intelligence, so really it should be no surprise that his report on the new Iliad e-reader should be so thoughtful. Nevertheless, it's such a pleasure to find in the sea of technophobia we've been paddling in lately that I bring it to your attention, along with his (very reasonable) plea for more smell…
"Meanwhile, my advice to the makers is to refine the page-turning just a little more, offer a battered blue cloth-bound wallet and, above all, make it smell – just a little musty, please. Or dank. You could offer a choice. But it's clear enough that after all the waiting and the over-hyping, the ebook is arriving. Before long you are going to see them being carried nonchalantly around. And after that some of you, at least, are going to buy one." Curling up with a good ebook, Andrew Marr, The Guardian 11 May 2007
Personally, though, I think I'd prefer a smell dial so I could switch from cedarwood to rosepetal to fish and chips, depending on what I was reading..